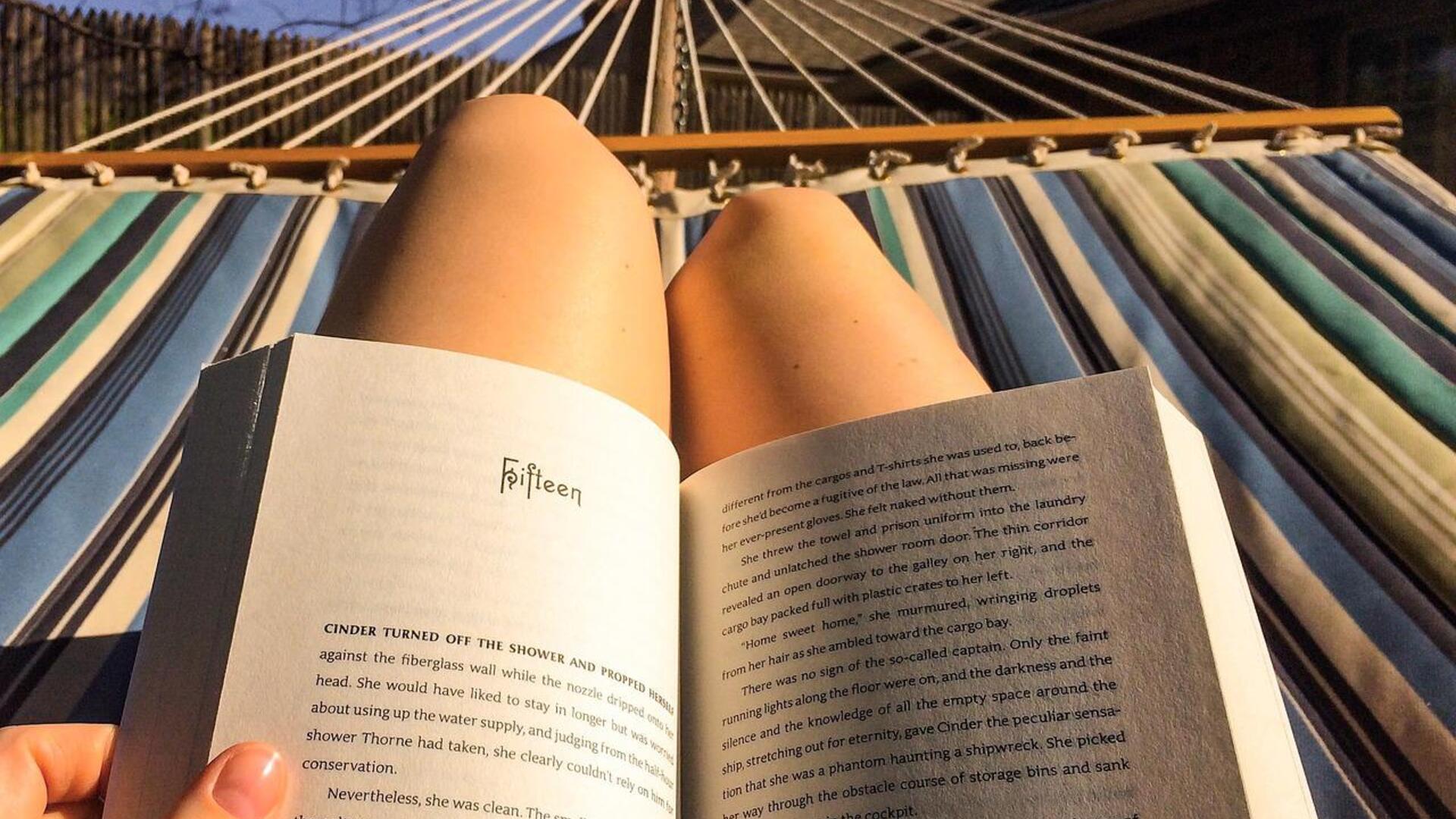 Summer is here, and that means many things: cottage weekends, camping trips, road trips, beach days, finding new outdoor reading spots around the city... No matter what you find yourself up to this summer, it’s always nice to take an hour or two to read—whether it’s on a hammock in the sun, lying on a sandy beach, sitting under a leafy tree in the park, or curled up next to a window, watching the rain outside. When I’m at the cottage, I often read for hours on the dock (or in the hammock, my other favourite spot), so here are eight books that I’m putting on my TBR (“To Be Read”) list and hoping to pick up and enjoy this summer.

When No One Is Watching (HarperCollins, 2020)

This thriller, an instant New York Times bestseller, is a book I’ve had on my “To Be Read” list for a while. Sydney Green has lived in Brooklyn all her life, but the changes wrought by gentrification means the neighbourhood she loves is disappearing—neighbours she’s known for years are being squeezed out, and “FOR SALE” signs are popping up everywhere. To hold onto her community’s past and present, Sydney channels her frustration into a walking tour and finds an unlikely (and unwanted) assistant in one of the new arrivals to the block—her neighbour Theo. However, their innocent deep dive into the neighbourhood’s history quickly turns sinister as they begin to question: When does coincidence become conspiracy?

This book caught my eye because it deals with the power of language and words, and the ability they have to either elevate or repress.

Esme is born into a world of words. Irrepressibly curious, she spends her childhood in the Scriptorium, a garden shed in which her father and a team of dedicated lexicographers are collecting words for the very first Oxford English Dictionary. With no mother to mind her, Esme often sits, unseen and unheard, beneath the sorting table. One day, a slip of paper flutters down beneath the table. Esme rescues the slip and sees it contains the word “bondmaid.” After learning that the word means “slave girl,” she begins to collect other words that have been discarded or neglected by the dictionary men.

As she grows up, Esme realizes that words and meanings relating to women’s and common folks’ experiences often go unrecorded. So, she begins in earnest to search out words for her own dictionary: the Dictionary of Lost Words. To do so she must leave the sheltered world of the university and venture out to meet the people whose words will fill those pages.

Inspired by actual events, author Pip Williams has delved into the archives of the Oxford English Dictionary to tell this highly original story. Set during the height of the women’s suffrage movement and with the Great War looming, The Dictionary of Lost Words reveals a lost narrative, hidden between the lines of a history written by men.

Do you love a slow-burn thriller? Then don’t skip this one! Out of a job and flat broke, twenty-something Jess asks her half-brother Ben if she could crash with him for a bit—he didn’t say no, but he didn’t sound thrilled when she asked. When she arrives in Paris and heads to his apartment, she finds it empty…but Ben doesn’t seem to have left the building. The list of suspects grows as Jess encounters one unfriendly resident of the building after another, and from the socialite to the concierge, everyone knows something they’re not telling.

Have you ever heard of the mystery of the lost city of Roanoke? The colony was an attempt by Sir Walter Raleigh to found the first permanent English settlement in North America. The first Roanoke colony was founded by governor Ralph Lane in 1585 on Roanoke Island, in what is now Dare County, North Carolina. Following the failure of the original 1585 settlement, a second expedition, led by John White, landed on the same island in 1587, and set up another settlement. While awaiting a delayed resupply mission, White left the colony and returned to England in 1586. Four years later, White returned to the Roanoke colony, but upon his arrival he found the settlement fortified but abandoned. The cryptic word "CROATOAN" was found carved into the palisade, which White interpreted to mean the colonists had relocated to Croatoan Island. Before he could follow this lead, rough seas and a lost anchor forced the rescue mission to return to England. The fate of the approximately 112–121 colonists remains unknown.

In this page-turner, what happened to the lost colony remains a mystery, but the women descended from Eleanor Dare, one of the original colonists, know the truth, revealed in her treasured commonplace book. The book is passed down through fifteen generations of daughters, until thirteen-year-old Alice, who had been next in line to receive it, tragically loses her mother, fracturing the unbroken legacy. The book soon faded into memory.

That is, until years later, when Alice is presented with the deed to her abandoned family home. Determined to sell the place, Alice returns home with her own thirteen-year-old daughter, Penn—but when Penn’s curiosity begins to unveil secrets around every corner of the old house, Eleanor’s book is finally found, and Alice must grapple with the secrets inside it.

On the outside, it might seem like you have it all—a good marriage, healthy children, and a successful career…but do you ever feel like something is still missing? Determined to end that nagging feeling, Gretchen Rubin set out on a year-long quest to learn how to better enjoy the life she already had.

Each month, Gretchen pursued a different set of resolutions—go to sleep earlier, tackle a nagging task, bring people together, take time to be silly—along with dozens of other goals. She read new things, everything from classical philosophy to cutting-edge scientific studies, from Winston Churchill to Oprah, developing her own definition of happiness and a plan for how to achieve it. She kept track of which resolutions worked and which didn’t, sharing her stories and collecting those of others through her blog (which was created to fulfill one of March’s resolutions). Bit by bit, she begins to appreciate and amplify the happiness in her life.

Maybe You Should Talk to Someone (HarperCollins, 2019)

One day, Lori Gottlieb is a therapist who helps patients in her Los Angeles practice. The next, a crisis causes her world to come crashing down. Enter Wendell, the quirky but seasoned therapist in whose of­fice she suddenly lands.

Gottlieb reflects on the inner turmoils of her own patients’ lives—a self-absorbed Hollywood producer, a young newlywed diagnosed with a terminal illness, a senior citizen threatening to end her life on her birthday if nothing gets better, and a twenty-something who can’t stop hooking up with the wrong guys—and realizes that the questions they are struggling with are the same ones she now finds herself struggling to answer.

With wisdom and humor, Gottlieb invites us into her world as both clinician and patient, examining the truths and fictions we tell ourselves and others, revealing an illuminating account of our own mysterious lives and our power to transform them.

This slow-burn thriller received a lot of critical acclaim and even won the 2019 OLA Forest of Reading Evergreen Award—and it was the Reddit book club’s pick for January 2020! It also comes highly recommended by Senior Editor Beth, who is currently reading this chilling novel.

As winter fast approaches, a small northern Anishinaabe community goes dark. Cut off, panic builds as the food supply gets smaller and smaller. As the band council and a community members struggle to maintain order, a strange visitor arrives…and soon after, others follow.

The community’s leadership loses its grip on power as the visitors manipulate the tired and hungry citizens and take control of the reserve. Months pass, and tensions rise, as does the death toll in the community. Frustrated by the situation, a group of young friends and their families turn to the land and Anishinaabe tradition in hopes of helping their community thrive again, endeavouring to restore order while grappling with a grave decision.

This acclaimed novel imagines a post-apocalyptic world, in the vein of 1984 or The Handmaid’s Tale. In the early 2020s, climate change and economic crises create social chaos. Fifteen-year-old Lauren Olamina lives inside a gated community with her preacher father, family, and neighbours, protected from California’s dangers, from water shortages to roving bands of desperate vagabonds. In a society where any kind of vulnerability is a risk, Lauren suffers from hyperempathy, a debilitating sensitivity to the emotions of others. Lauren knows she must make her voice heard in order to protect her loved ones from the chaos and disaster her small community is stubbornly trying to ignore. But what begins as a fight for survival soon leads to something much more: the birth of a new faith…and a startling vision of human destiny.

Do any of these books catch your eye? Which books are on your summer TBR list? Let us know on Twitter: @EditingCo!